You are here: Home / Home
The US Food and Drug Administration launches an international study on a new technique for Inappropriate Sinus Tachycardia, a form of cardiac arrhythmia, developed by UZ Brussel

The US Food and Drug Administration launches an international study on a new technique for Inappropriate Sinus Tachycardia, a form of cardiac arrhythmia, developed by UZ Brussel

In a world first, patients treated at UZ Brussel as part of an international study on hybrid ISNT ablation technique

On 31 May 2022, in a world first, two patients were treated at UZ Brussel for inappropriate sinus tachycardia using the hybrid ISNT ablation technique, as part of an international study by the US Food and Drug Administration (FDA). IST is a rare form of cardiac arrhythmia that mainly occurs in young women. Until now, no genuinely effective treatment was available. In 2015, UZ Brussel cardiac surgeon Prof. La Meir and electrophysiologist Prof. De Asmundis developed hybrid ISNT ablation, a technique which uses a catheter and keyhole surgery to isolate the sinus node in order to resolve this arrhythmia. The FDA has recently launched a major international study of this technique in which 40 American and five European centres will be taking part.

Inappropriate sinus tachycardia (IST) is a form of cardiac arrhythmia in which the sinus node causes the heart to beat too fast both at rest and during exercise. The sinus node is the heart’s natural pacemaker and normally keeps it beating at the correct rate. IST patients experience fatigue, diminished capacity during effort and dizziness. This condition affects over 1% of the population, mainly women in their twenties.

Although the condition is often transitory or treatable with medication and fitness training, many patients still experience difficulties in their daily lives due to IST. For instance, such patients find it difficult to work or study for a normal length of time.

Continue reading below the photo. 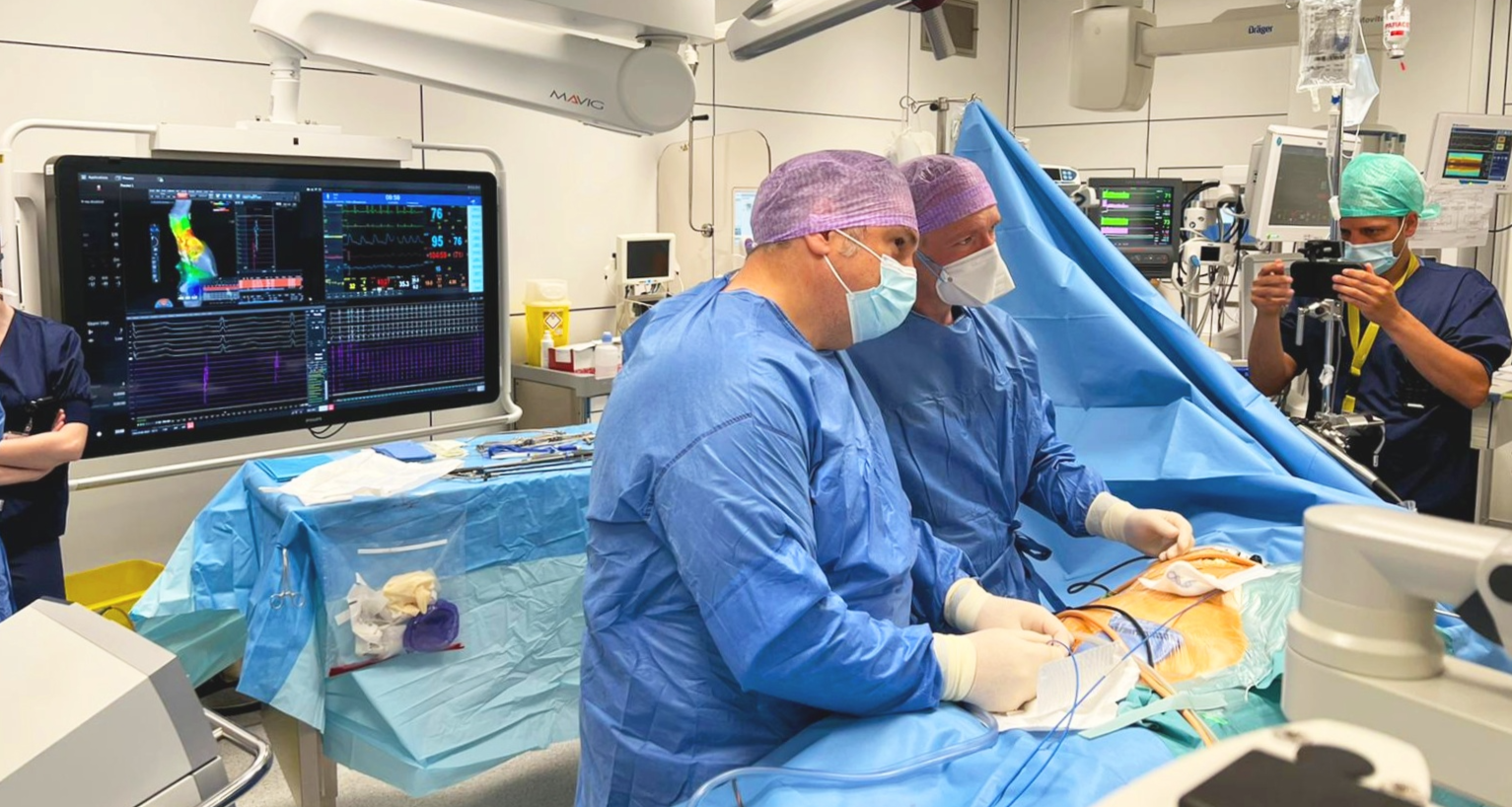 Traditionally, IST is treated by slowing down the sinus node by catheter ablation (an operation performed via a catheter through the groin). However, this was usually unsuccessful or a pacemaker was still required thereafter.

In 2015, cardiac surgeon Prof La Meir and electrophysiologist Prof. De Asmundis developed a new technique: hybrid INST ablation. During this procedure, the electrophysiologist inserts a catheter into the right anterior chamber of the heart through the groin to map the sinus node, while the cardiac surgeon makes three ablation lines (scars in the electrical network of the arrhythmia) using keyhole surgery on the right side of the thorax, electrically isolating the sinus node from the upper and lower venae cavae and the area between them.

Their positive experience with the first 50 patients was published in the American Journal of Cardiology and brought many international teams to Brussels to learn the procedure and use it on their patients. The subsequent multicentre results in over 250 patients were also published in the Journal of Interventional Cardiac Electrophysiology in April of this year. All of this has led to the design of a large-scale FDA (Food and Drug Administration) study in which up to 40 centres in America and five centres in Europe will participate. The study is unique in that it focuses on the only treatment available for this condition and does not compare it to any other treatment.

On 31 May, the first two patients worldwide were successfully treated at UZ Brussel.

Ja, ik schrijf me in!
This page was updated on .
Would you like to give feedback on this page?