Sometimes whole sections of text in our instruction manual are repeated or omitted, even sections that consist of millions of letters. We call these CNVs or Copy Number Variations. They can be inherited or can occur 'de novo'. 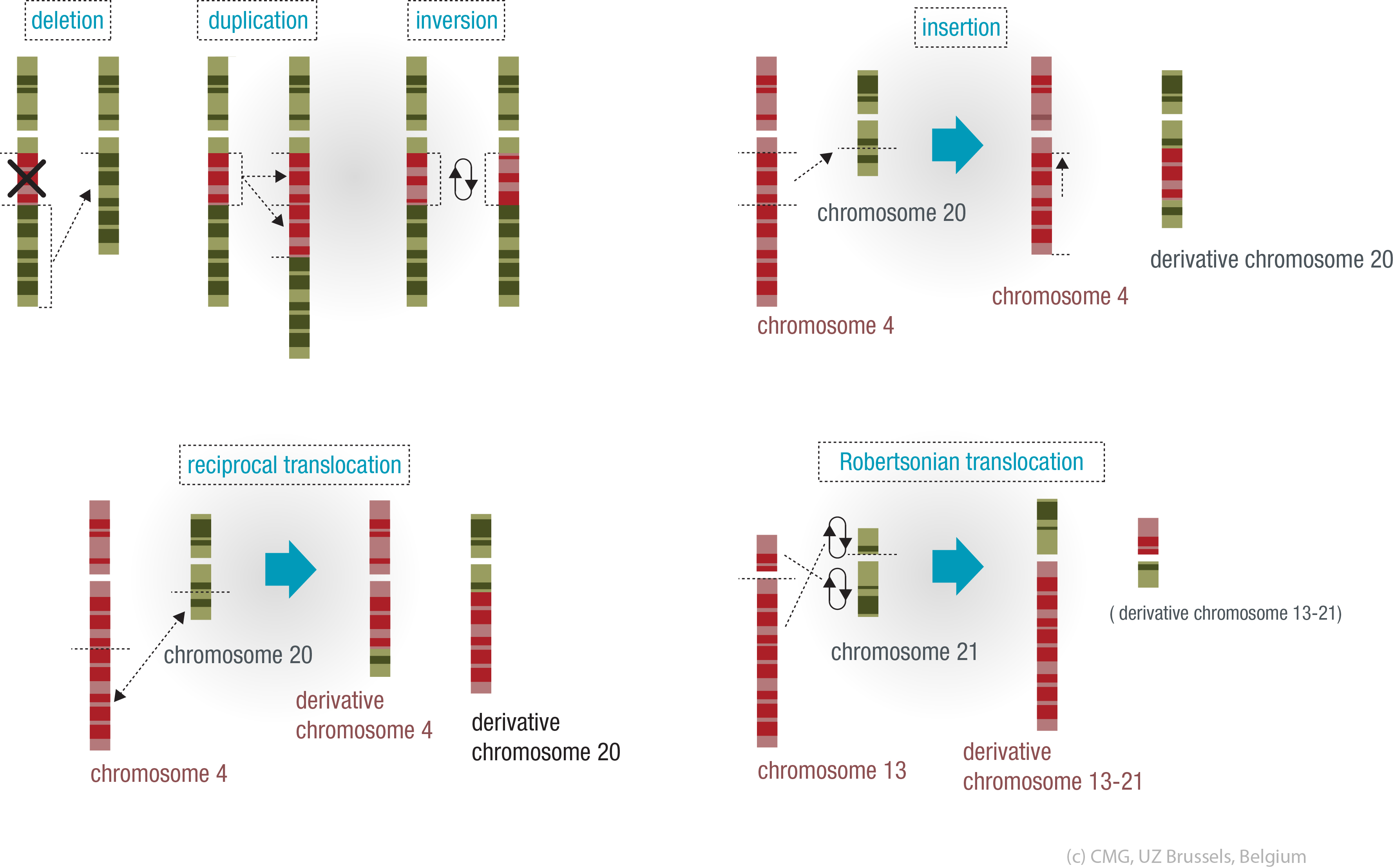 If genetic material is lost, we call this a deletion. Depending on the amount we call these macrodeletions or microdeletions, but the consequences can be severe in both cases.

Sometimes a deletion is so large that a whole chromosome is missing. This is called a 'monosomy'. In almost all these cases the fetus is not viable and will die spontaneously. Monosomy of the X chromosome is the only one that allows the fertilised egg cell to develop into an embryo and continue to develop as a human being. In that case the baby will be a girl with only 45 chromosomes (Turner syndrome).

If an error during cell division results in the doubling of a chromosome or part of a chromosome, we call this duplication. This can occur in both autosomes and sex chromosomes.

If a whole chromosome is doubled, we call this a trisomy. People with a trisomy - quite logically - have 47 rather than 46 chromosomes. This usually results in severe abnormalities. As a result the embryo is not viable and a spontaneous miscarriage occurs. The three viable autosomal trisomies are trisomy 21 (Down's syndrome), trisomy 18 (Edwards syndrome) and trisomy 13 (Patau syndrome).

In an inversion, part of the genetic material is exchanged within a single chromosome. As long as no genetic material is lost as a result, this will usually not result in an inherited disorder affecting the carrier of the inversion. Her egg cells or his sperm cells may, however, acquire an imbalance between the chromosomes during cell division.

Two types of translocations are known:

A marker chromosome is extra chromosomal material that cannot be clearly identified or characterised using conventional banding techniques. It is actually a partial trisomy that originates from one or more of the 24 different chromosomes.

At certain specific, fragile positions on chromosomes in metaphase, 'gaps' may occur which can lead to spontaneous break points during cell division.

There are more than 120 fragile positions that are currently known in the human genome. These can be classified as 'general' or 'rare' on the basis of the frequency with which they occur.

General fragile positions occur in (almost all) normal individuals. They often consist of regions where DNA is repeated (repeats). The most extensively studied form of rare fragile position is FRAXA, which results in the Fragile X syndrome, a form of inherited mental retardation caused by expansion of a CGG repeat.